Grown in nearly every major wine producing country among across a wide variety of climates Cabernet Sauvignon is one of the world's most widely recognised red wine grape varieties. It is the most widely planted and significant varieties in the Medoc district of France's Bordeaux region where it is often blended with Merlot and Cabernet Franc. It is also the most successful red wine produced in California.

Long thought to be an ancient variety, recent genetic studies have shown Cabernet Sauvignon to be the product of a chance crossing between Cabernet franc and Sauvignon blanc during the 17th century in southwestern France.

Cabernet Sauvignon grapes are fairly resistant to disease and spoilage and able to withstand some autumn rains with little damage. It is a mid to late season ripener.The berries are small, spherical with black, thick and very 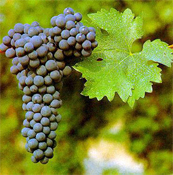 tough skin and the vines are hardy and resistant to rot and frost - and to its consistent presentation of structure and flavours which express the typical character of the variety.

One of the most noted traits of Cabernet Sauvignon is its affinity for oak, either during fermentation or in barrel aging. In addition to having a softening effect on the grape's naturally high tannins the unique wood flavours of vanilla and spice complement the natural grape flavours of black currant and tobacco.

The taste and aroma can be predominantly blackcurrant and peppery, but variations include touches of redcurrant, plum or even blackberry and, in the cooler climates, mint. Other characteristics include Black cherry, plum, spices, leather and tar flavours. Also prominant can be chocolaty undertones to vanilla, oak and cedar depending on the myriad of surrounding influences. Australian Cabernet Sauvignon is often considered to produce a vanilla flavour while the French variety is typically more blackcurrant.

A great deal of Cabernet Sauvignon's reputation has been built on its ability to age and develop in the bottle. Apart from softening some of their austere tannins, as Cabernet wines age new flavours and aromas can emerge and add to the wines' complexity.